5.Can we control our immune system??


If the hygiene hypothesis is correct, we might be able to control our immune system and prevent disease. Frequent interaction of children with the outside environment will allow them to contact various types of bacteria, thereby preventing allergic diseases. Furthermore, there are several reports that certain foods, including bacteria, work well with our body. For example yogurt, containing lactic acid bacteria, is believed to make us healthy and prevent diseases as these bacteria strengthen the immune system. This hypothesis is termed probiotics. However, the extent of protection that probiotics offer our body is still unclear. This is because we are already constantly exposed to various strains of bacteria present in our environment. Additionally, most of the available data demonstrating the benefits of bacteria to our body are claimed by companies producing fermented foods. Thus, this represents research conflicts that require further detailed investigation/experiements.

Posted by Mizuho at 2:48 PM No comments:

4.How do environmental factors affect to our immune system?

Some environmental factors such as smoking and dust affect the susceptibility for allergic disease. In contrast, there are interesting reports implicating that contact with bacteria protect from allergic disease. This hypothesis is called a hygiene hypothesis. For example, allergic disease has been increased in developed countries using antibiotics and clean products. Furthermore, it is reported that the children growing up in farming area where they have more chance to exposure to bacteria are more resistant to asthma development compared with urban area. These suggest that that exposure to bacteria protects from allergic disease development, though there are still no define evidence.
The allergic diseases are caused by inappropriate immunological responses to harmless antigens called allergens. The mechanism of hygiene hypothesis is unclear, but it is proposed that bacteria induce the immune response to stimulate immune cells eliminating bacteria and down-regulates to produce allergic antibody for harmless antigens. In other words, the insufficient stimulation of anti-bacterial immune response leads to an overactive response against allergens, which in turn led to allergic disease. The children living in too sterile an environment are not exposed to enough bacteria to keep the immune system busy.

Posted by Mizuho at 2:32 PM No comments:

3.Why is the immune system important for our body?

2.How does the immune system recognize and destroy the pathogenic bacteria?


Once bacteria enters into our body, the cells within our body recognize the bacteria. The cells have several pattern recognition receptors, which recognize components that are conserved among broad groups of bacteria. For example, these receptors recognize bacteria specific DNA, RNA and bacterial cell walls, respectively, but do not recognize product from ourselves. There are more than 30 receptors at the surface and inside of the cells.
However, our immune system must destroy only pathogenic bacteria because our body originally has many non-pathogenic and useful bacteria. It is still unclear how our immune systems identify only pathogenic bacteria but not non-pathogenic bacteria, though both groups of bacteria have the same components recognized by pattern recognition receptors.


After the recognition of bacteria, many molecules trigger the release of several cytokines. These cytokines are responsible for communication between white blood cells. These cytokines recruit one of the white blood cells, neutrophils and macrophages which eat and clear the bacteria. This step is called the innate immune response and it is early but non-specific.
Additionally, the macrophages present a part of bacterial components at the surface of the cells as a sign that bacteria is coming. Then, special types of white blood cells, T cells, contact the macrophages and recognize what kind of bacteria is coming. T cells induce cytokines and activate more macrophage. On the other hand, T cells contact with B cells, which are the other white blood cells, and these B cells produce antibodies which bind to a specific bacteria and eliminate them. This step, which is called the adaptive response, is slow but specific. The B cells memorize each specific pathogen and induce an earlier and stronger response if the pathogen is detected again.


Bacteria are microorganisms that are ubiquitous in our environment including in our body, on food and in soil. Bacteria have a wide range of shapes, ranging from spheres to rods.
There are typically 40 million bacteria in a gram of soil, a million bacteria in a millilitre of fresh water and 10(15) bacteria that is ten times as many bacteria as human cells in the human body. In all, there are approximately 5×10(30) bacteria on Earth.

Most of the bacteria in our environment are harmless and important for our body. For example, they have roles to produce nutrients, protect from pathogens and help to establishment of our immune system. In addition, bacteria are important for the production of fermented food such as cheese and yogurt, as well as the manufacture of antibiotics and other chemicals. However, some of the bacteria are pathogenic and they attack our body. Therefore, our immune systems try to block these bacteria infecting us. 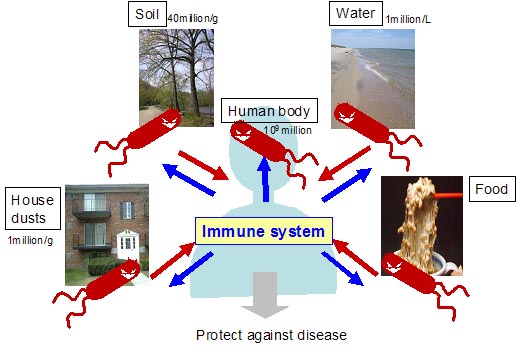 Posted by Mizuho at 2:19 PM No comments:

Interaction of bacteria and immune system ~ Is bacteria good or bad?


There are many bacteria in our environment such as in soil, on food and in our body. Most of bacteria in our environment are harmless and important for our body. However, some of them are pathogenic and attack our body, although, we usually do not become diseased because of our immune system. The immune system is one of the mechanisms within our body that protect against disease by killing bacteria and virus. Therefore, it is important to understand how our immune system interacts with bacteria.
Posted by Mizuho at 2:11 PM No comments:

Mizuho
I am a Japanese who is working as a biomedical researcher at a university in the US. I have stayed here for about 11 years. I enjoy my American life. I like the US!
Please give me comments on my posts or send me messages! Be my friends:)